Create an Account - Increase your productivity, customize your experience, and engage in information you care about.

George Washington Memorial Park, commonly known as the Jackson "Town Square", is the cultural, civic, and mercantile heart of the Town of Jackson. Dedicated as a park in 1934, the four main entrances at each of its corners are notably adorned with large arches made from elk antler sheds collected from the nearby National Elk Refuge. The first antler arch was built in 1953, and each arch is torn down and rebuilt periodically. The center of the park contains a stone memorial to famous mountain man explorer John Colter.

The park was named in order to memorialize George Washington for the 200th anniversary of his birth. The state of Wyoming, in cooperation with Congress, planned to honor the country's first president by establishing a George Washington Memorial Park in as many communities as possible.

The Town Square is surrounded by local businesses of all kinds including restaurants, art galleries, and retail shops. During the summer months, people often enjoy a horse carriage ride around the park as well as the nightly Town Square "Shootout" performed by the Jackson Hole Playhouse at 6 p.m. (except Sundays). 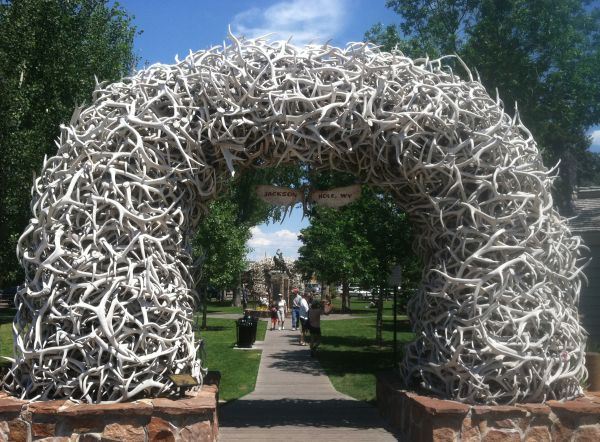 The Jackson Hole Historical Society & Museum guides a free walking tour of Jackson in the summer months beginning on the Town Square. Tuesday through Thursday at 10:30 a.m. you can join them as they point out many of the historic buildings surrounding the Town Square and discuss the wild characters and events of Jackson's past. In the Winter months, the Town Square is home to an ice skating rink, and Santa Claus makes his annual visit on the day after Thanksgiving at which time the trees and the arches are all lit up for the season. During all times of year the Town Square is a vibrant place of activity, hosting numerous fun and lively events of all varieties. Check the event calendar regularly to keep up to date on what's happening around town.